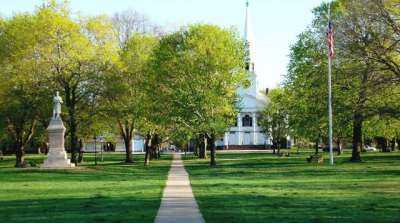 The 22,000 residents of Guilford enjoy a community that Money Magazine calls “one of the top places to live in the country,” not least because of the excellent schools, easy commutes, natural beauty and among the highest median household incomes in the state.

On the shoreline east of New Haven, the town is probably best known for its well preserved colonial-era history. In just 47 square miles, the town has one of the largest collections of historic homes in the country, including many from the 1600s. Several of these, like the Thomas Griswold House and Dudley Farm, are now museums that tell the story of early Puritan settlement.

In addition to the many public beaches and marinas, private beaches are maintained by associations in shoreline neighborhoods like Sachem’s Head, Mulberry Point and Indian Cove, which were originally developed as summer colonies but now have year-round homes.

Guilford has a thriving fine arts and performing arts community, headed up by the Shoreline Arts Alliance, which organizes free summer concerts, a series of Shakespeare plays on the Green and an annual arts showcase.

The Guilford Public Schools are commonly recognized as among the most successful in the state.

A boutique real estate agency
Located in Wooster Square, Seabury Hill is known for its personalized service and attention to detail. Privately owned and operated since 1926, it has a proud history of serving the real estate needs of the Yale community, Greater New Haven and Shoreline. Our company’s expertise is in listing and selling residential homes, condominiums, investment and multi-families, Buyer/Tenant and Seller/Landlord representation, as well as academic and luxury rentals.
Meet Our Team